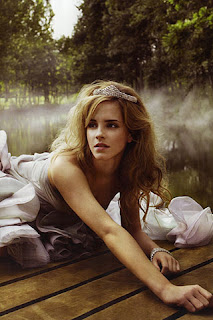 It seems that nowadays for an entertainer, being a “triple threat” has taken on a whole new meaning. Gone are the days where being able to dance, sing, and act were all it took to earn major kudos. Instead, celebrities from every medium are trying their best Donald Trump impersonation and becoming business moguls.
Next to join the growing list is star of the Harry Potter franchises, Emma Watson, who will be a debuting an organic clothing line this spring. 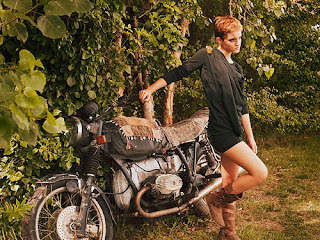 After working on a successful eco-friendly line with fashion company, People Tree, she has decided to branch off and design her own line with fame designer Alberta Ferretti.
The line, whose name has yet to be revealed, is said to be inspired by some of her favorite classic 60’s film actresses.
Watching the young starlet grow beyond our eyes has been a joy and she has done so gracefully in front of the cameras. Overtime she has stepped into her own as a growing fashion princess and while doing so, has always made public support of organic and green living.
I have to admit I am always a little leery when stars decide to add fashion designer to their belt, because I often believe that they are simply putting their name on it and question how involved they really are. However, I have a feeling this will not be the case.
In the meantime, we can still check out some of Emma’s fashion sense, with her last collaboration with People Tree, at their website, http://peopletree.co.uk/
Posted by KayTeeV No comments: Links to this post

Looking for a way to join the party this Valentines Day?


There is a new socially responsible condom on the market, and by the way, that little pocket on the front of the jeans is commonly known as a condom pocket. What I learned in Brownies and Girlscouts...be prepared, has served me well over the years.

Let’s face it; birth control is complicated, and definitely not stylish. The Pill liberated women since the early sixties, but also shifted the burden to the softer sex, and does not protect against nasty STDS. There is a new choice on the market with Sir Richard’s Condom Company, founded by Mathew Gerson and Mark Kreloff. For every condom you buy they donate one to a country in need. HAZZAH!!!

They are made from latex (a renewable resource) and boxed in stylish, recyclable boxes, and they come in extra large, ultra thin, classic ribbed and something called “pleasure dots.” Find them at stores as diverse as Whole Foods and Fred Segal, as well as their website.
Posted by ecobabe No comments: Links to this post

A few days ago I failed to purchase a piece of wearable art while traveling abroad in a trendy part of Istanbul. It was a stunning architectural purplish grey silk tunic with patches of the thinnest leather I have ever touched…like butter really, however the piece was slightly out of my travel budget. It was also one of those pieces I would probably only wear two or three times a year, though these would have been events to remember, I’m sure, and for me what I wear lends part to how I experience events and interact with the world. It was to die for and I terribly regret not buying it.

The thing is, if not born to money, it usually takes us some time to realize that good clothes are worth investing in, even if more expensive, and by good I mean well made, but also original, timeless, art-like. This is a real part of sustainable style, for classic and timeless art pieces that are well made are wardrobe investments.

These pieces delight us when we buy them, and continue to bring joy to us as we recall the occasion when we found the piece and the events to where we wore the garment. As a fashion enthusiast, I am passionate about collecting textiles and fashion, and although I did not make an investment on my recent trip to Turkey, my philosophy is Life is Long and more opportunities lie just ahead.
Posted by Anonymous No comments: Links to this post