Coral is Too Precious to Wear

Environmentally aware designers are making a colorful splash (no pun intended) into ocean conservation; inspired by SeaWeb’s "Too Precious to Wear" campaign. To raise awareness about the world’s precious and delicate coral reef depletion, the campaign encourages unique ways for us all to enjoy inspired coral designs that are NOT CORAL.

At a recent conference in the big apple, Josh Dorfman, super cute environmental entrepreneur, media personality, and acclaimed author of The Lazy Environmentalist, lead a panel discussion entitled “Too Precious to Wear: Conserving Coral, a Jewel of the Ocean,” as part of the annual Initiatives in Art and Culture conference. Panel participants included SeaWeb president Dawn M. Martin and Dr. Andrew Baker – also super cute and 2008 Pew Fellow recipient, renowned coral scientist and professor at the . I am so glad that I had the opportunity to hear about their cause and wanted to share with you what I discovered!

Look for deep-sea red, orange and pink corals to show up on the runway in 2009 – not as baubles made from animal carcasses harvested from the Earths precious reefs, but instead as a color celebration honoring this unique breed of animal that has inspired so many artists throughout the ages. The campaign encourages designers in every medium to create using coral colors and textures but sans the real thing.

Precious corals are facing threats from climate change, over-fishing, pollution and consumer demand. According to Dawn, 3/4 of our planet is ocean yet less than half of a percent of conservation dollars go towards ocean preservation. Because of these concerns about the sustainability of corals as a raw material, designers such as the gang from Tiffany & Co. removed coral from their product lines over five years ago – Hazzah!

SeaWeb’s Too Precious to Wear campaign aims to create a demand for coral conservation and is calling for designers to step up to the challenge in the protection of corals, and designers are taking this challenge seriously.

Precious corals are more often seen adorning the necks of women than in their natural ocean habitat. Red corals have been fished for more than 5,000 years in the Pacific and the , but serious signs of decline have appeared in just the past two decades. The , as the world’s largest documented consumer, has placed significant pressure on these threatened animals, importing more than 26 million pieces from 2001 to 2006. Too Precious to Wear is calling for increased monitoring of the red coral trade. The campaign is urging the and other countries to list red and pink corals under Appendix II of the Convention on International Trade in Endangered Species (CITES).

There are many opportunities to celebrate the beauty of the ocean without destroying Earth’s precious resources. Jewelry designer, Hannah Garrison of AZU jewelry chose to depict coral’s delicate branches in solid sterling silver, while another interpretation by Luciana Jewelry is all about the color. The Berry Coil Bracelet (above) is Fairly Traded and coral inspired, in coral red seeds and recycled Colombian pesos and topped off with a faceted clear quartz nugget adds sparkle that I find super fab.

The Jay Strongwaters coral inspired Compact contributes, one compact at a time, to a better world. The collectors' limited-edition compact artfully depicts coral in hand lacquered decoration. Proceeds go to “Reefs of Hope,” a Pew Institut

e for Ocean Science project. I found this at Neiman Marcus for $420 a while back.

Eco clothing designer Bonnie Siefers, of Jonano celebrates coral in her Angel Collection that is heavenly, again please excuse the pun, in shades of coral that are certain to rock the runway this spring. Check out Too Precious to Wear (www.tooprecioustowear.org) to see other coral-inspired designers.

PS: SeaWeb and Too Precious to Wear will launch a collection of coral alternative jewelry with nine leading fashion and jewelry designers in winter 2009. Each designer has created a single signature piece inspired by corals and our ocean planet. 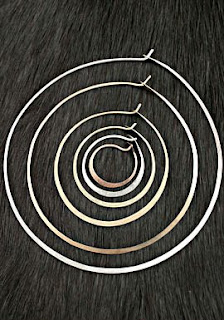 For as long as my ears have been pierced, I have coveted one single style of adornment, the hoop earring. Sure, starting at the age of 16, I had my days of enamel butterflies, pearl studs, crystals, beads and even diamond solitaires, but I always went back to that simple, single, circular hoop. Yes, through the years I’ve loved many ... different styles from the small huggers to the all-time favorite soda can-sized summer of love silver stunners of the 70s. There is something so special about them all. I notice that in many of my photos I’m wearing the same pair of silver favorites. We've enjoyed many good times together. I adore these earrings.

Now I’m craving them in gold. Melissa Joy Manning has perfected this perfect accessory and she does so in recycled silver and gold. (Santa, are you listening?)

Melissa Joy Manning jewelry is handmade in Oakland, California by trained metal smiths earning a living, working wage. We manufacture all components of our jewelry in our own studio using only the finest materials purchased from our trusted, American suppliers. We believe in ethical business practices and green resources.

These beauties are offered in a variety of shapes such as square, oval, triangular, elliptical, hexagonal even rockin' stars. Oh, and the colors! Pink or yellow gold as well as silver. And there’s a size for every mood. So many choices and only two ears. What's a hoop lovin' girl to do?

This weekend I’ll be going through my jewelry box in search of those earrings whose mate has gone astray, anything less than perfect. And I’ll be cashing all of them in at a gold buying party. Yes, that’s right. I’m trading in the trash to a company who recycles gold and getting some cash in return. And I’m taking my money and buying the most perfect pair of hand forged hoops, in recycled gold, of course. (Oh, and Santa? I've been very good. And I like the triangles in pink gold. And silver stars ... and ....)